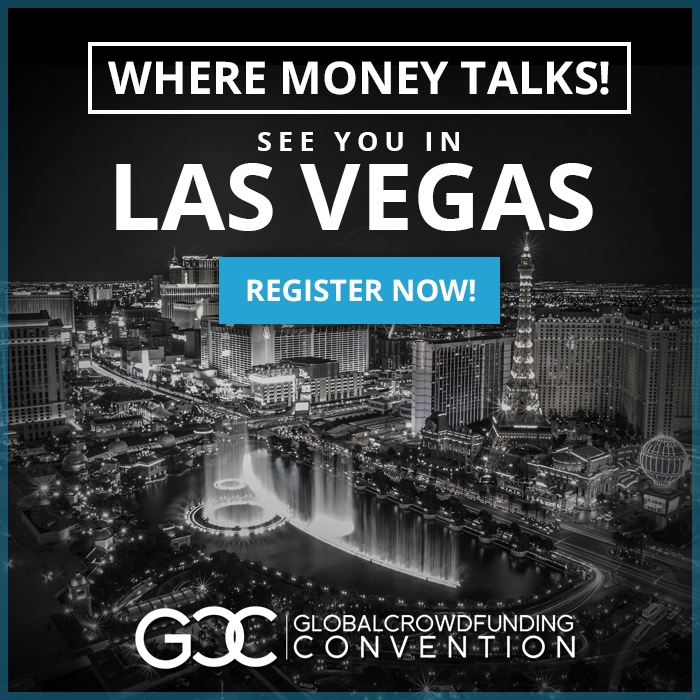 Anyone attending The Fifth Annual Global Crowdfunding Convention (GCC) at Planet Hollywood will walk away armed with all of the information they need to plan and execute a crowdfunding campaign. Show creator and organizer Ruth Hedges is a crowdfunding force in her own right. Here are some excerpts from her bio…

Ruth E. Hedges is one the world’s foremost authorities on crowdfunding and is one of the original pioneers of the legislation that was ultimately signed into law as the JOBS Act on April 5, 2012. She was honored with an invitation to the White House for its Crowdfunding Champions of Change event. As an industry expert, Ms Hedges has been interviewed or quoted in over 50 major publications and was selected to teach the first university-level course on securities-based crowdfunding in the nation at the University of Nevada Las Vegas ( UNLV).

Based on this alone I’d pay to hear Ruth mumble in her sleep. Attendees to GCC are in for three days of day-and-night learning and networking driven by speakers from every sector of the economy ranging from Fortune 500 companies to uber successful crowdfunders to leading business journalists who live and breathe crowdfunding.

Put all of this intelligence at the Planet Hollywood Resort and Casino in the middle of the Las Vegas strip and you’re in for the experience of a lifetime.

Early bird tickets priced at just $495 are available for two more days and then the price jumps to $797.

Every smart crowdfunder knows how valuable early birds are so save yourself $300 and grab your early bird tickets to GCC 2016 in Las Vegas right now.

(Disclosure: Crowdfund Buzz is an affiliate of The Global Crowdfunding Convention and we receive a percentage of every sale generated through the links in this blog post.)